Research has shown that Raspberry Ketone is considered to be not only one of the safest natural supplements for weight loss, but also one of the most effective. Raspberry Ketone increases the production of a hormone called adiponectin. Adinopectin controls changes in metabolic action and fat breakdown. A decrease of this hormone in the body is thought one of the main reasons for obesity and other diseases. The increased production of this hormone speeds up metabolism and increases lipolysis (fat breakdown) in the body. A recent study showed subjects taking the formula in Raspberry Ketone Fire increased their resting metabolism and lost an average of 2 - 4 pounds per week with no change in their diet. With its professional strength formula combined with it's fast and efficient absorption, Raspberry Ketone Fire is regarded by many weight loss experts to be one the most effective Raspberry Ketone formula available for burning fat and losing unwanted pounds.

Take 1 capsule 30 minutes before each meal with a full glass of water.

Keep out of reach of children. Consult your doctor before taking this product if you are on any medication. 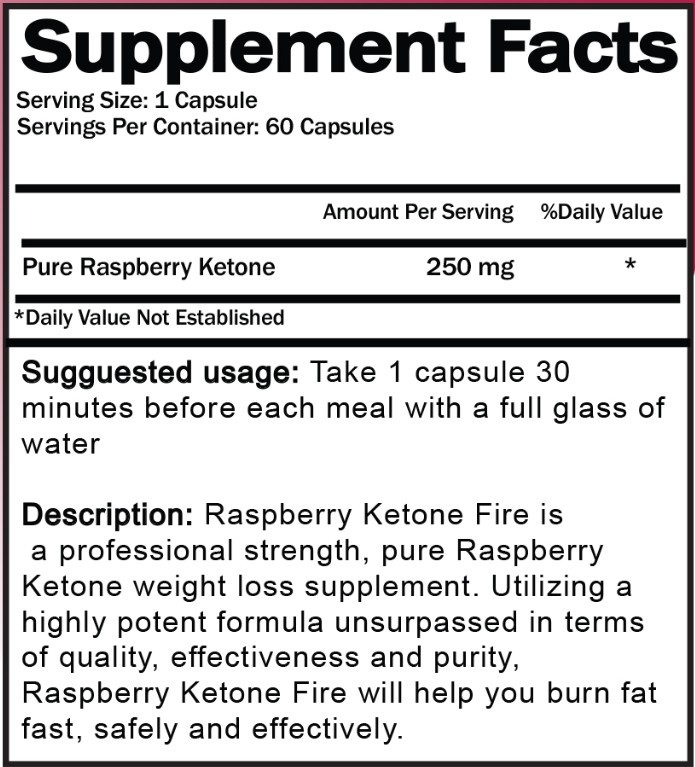 These statements have not been evaluated by the Food and Drug Administration. These products are not intended to diagnose, treat, cure, or prevent any disease.

Added to your cart: